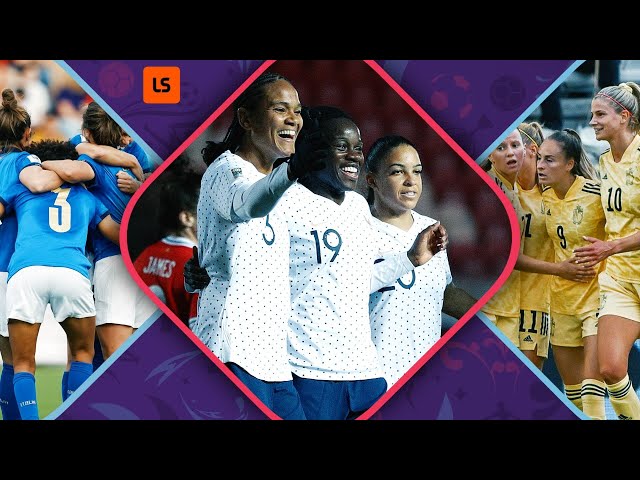 France: Les Bleus are currently ranked third in the world and head coach Corinne Diacre will fancy her chances of delivering the nation's first European Championship.

Now spearheaded by Paris Saint-Germain sensation Marie-Antoinette Katoto — a player Diacre left out of her World Cup squad in 2019 — France have the firepower to compete against the very best on the continent.

Italy: Another nation looking for their first triumph in the Euros is Italy.

However, they have been in fine form under Milena Bertolini and reached the quarter-finals of the 2019 World Cup in France.

Juventus pair Cristiana Girelli and Barbara Bonansea will be a threat and could well be the difference between success and failure.

Belgium: Ives Serneels' charges are playing in only their second-ever major international competition.

Belgium exited during the group stage at their tournament debut in 2017 despite conceding just three goals in games against Denmark, Norway and the Netherlands.

They have once again been drawn into a tough group but the experiences of their last attempt might help the Red Flames navigate this situation a little better.

With prolific scorers Tessa Wullaert and Janice Cayman in their ranks, the Belgians should not be underestimated.

Iceland: Iceland are now at their fourth successive European Championship and their squad possesses plenty of experience.

Thorsteinn Halldorsson's team will want to right a number of wrongs from their 2017 showing after they lost all three group games in the Netherlands.

It would be foolish to write off such a resolute defensive unit. But their downfall could be in attack with West Ham's Dagny Brynjarsdottir the only player in the squad to have scored more than 30 international goals.

The latter venue will host all of France's matches, while Belgium vs Iceland, Italy vs Iceland and Italy vs Belgium will all take place in the North West.

They have racked up an aggregate scoreline of 50-5 in that period, beating the likes of Brazil and the Netherlands, and there is a focus to this team that makes success at Euro 2022 feel almost inevitable.

Italy have also enjoyed an impressive year so far. Their only loss across five outings was in a penalty shootout with Sweden following a 1-1 draw during February's Algarve Cup.

However — a comprehensive 7-0 win over Lithuania aside — they are not a free-scoring outfit and have tended to triumph by narrow margins in recent months.

Iceland have managed an impressive four victories in their last five outings, though the USA did beat them by a five-goal margin.

Meanwhile, Belgium have secured three big wins in 2022 but have also drawn against Wales and Russia — needing penalties to overcome both at the Pinatar Cup.

The opener between France and Italy stands out as a key encounter as both sides bid to kick off their campaign with a statement win.

A loss would not exactly derail either team's hopes in the tournament — but a particularly poor performance might.

If France put on a finishing clinic, it will put their rivals on notice. But if Italy can frustrate Les Bleues then they will send out a clear message.

It is finely balanced and a superb way to kick off Group D.

France should be certainties to top the group but second place is up for grabs — and Matchday 1 could shape everything.

If Iceland and Belgium can only draw, you would back Italy to navigate their remaining games and progress. However, if either of those teams claims a victory then the pressure is on the two favourites.

Do not bet against Belgium causing an upset and progressing alongside France.