Shock results, drama and goals galore — the Champions League group stage is back with a bang.

Matchday 1 of Europe’s premier club competition is over and there were plenty of eye-catching displays from across the continent.

We have picked out our LiveScore Team of the Week, showcasing the standout performers from the tournament’s opening round of fixtures. 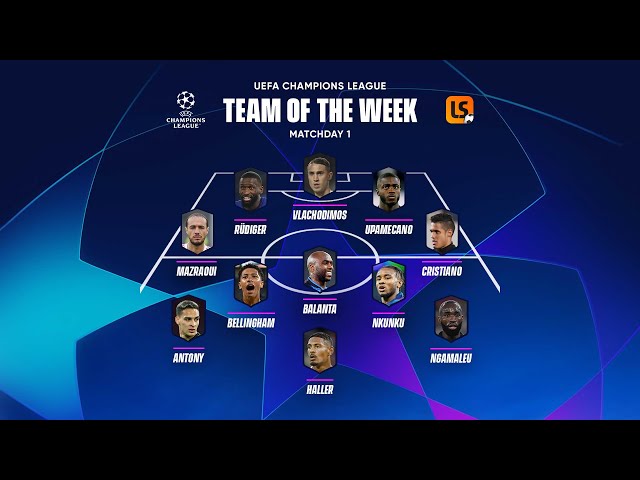 Benfica have now kept clean sheets in each of their three Champions League meetings with Dynamo Kyiv — and Odysseas Vlachodimos’ display on Tuesday night played a big part in the Portuguese outfit maintaining that record.

The goalkeeper made a crucial save from Vitaliy Buyalskyi in the game’s closing stages to ensure Jorge Jesus’ men left the Ukrainian capital with a hard-earned point in the bag.

Moroccan international Noussair Mazraoui set up Ajax's fifth goal in the 5-1 rout of Sporting and completed an incredible 93.8% of his passes.

The Dutch outfit's right flank was a constant thorn in the side of their Portuguese rivals and Mazraoui will be one to watch for the rest of the tournament.

No team in Europe has kept more clean sheets in all competitions than Chelsea following Thomas Tuchel’s arrival at Stamford Bridge last January.

That is no surprise when you consider the form of Antonio Rudiger, whose crucial second-half tackle on Sardar Azmoun helped earn the Blues a 1-0 victory in West London.

Dayot Upamecano was sensational with and without the ball against Barcelona.

No player made more tackles (four) or interceptions (four) than the defensive colossus, who also played the most passes (79) and accurate passes (70) in Bayern’s comprehensive 3-0 triumph at the Camp Nou.

Transnistrian upstarts Sheriff Tiraspol pulled off one of the shocks of the round by beating Shakhtar Donetsk — and full-back Cristiano set up both of his side’s goals.

His pinpoint cross was volleyed home by Adama Traore for the opener before a deep delivery was headed in by Momo Yansane to make sure of the points midway through the second half.

A goal and an assist against Besiktas will only have boosted Jude Bellingham’s burgeoning reputation as one of Europe's most exciting midfielders.

The teenage sensation fired the ball through goalkeeper Ersin Destanoglu’s legs for Dortmund’s 20th-minute opener, then showcased the creative side of his game by playing in Erling Haaland for their second of the night.

Paris Saint-Germain’s all-star cast could not find a way to beat Belgian outfit Club Brugge, who pressed Les Parisiens into submission for much of Wednesday evening’s encounter.

Eder Balanta played a key role in closing down PSG, winning back possession three times in the middle third of the pitch — more than any other Brugge player on the night.

Performances do not come much better than Ajax’s 5-1 away demolition of Sporting — and Antony was at the heart of the visiting side's sublime attacking display.

The winger assisted three of Sebastien Haller’s four goals, while only the former West Ham frontman had more shots than the 21-year-old’s three efforts in Lisbon.

Not many players score a hat-trick and still end up on the losing side, so Christopher Nkunku will be rueing his team’s defensive ineptitude in their 6-3 defeat to Manchester City.

Leipzig’s No18 became the first player to score three times in a Champions League game for the club after powering in two headers before finishing from a tight angle for his third.

The biggest upset in Gameweek 1 took place in Bern, where Group F underdogs Young Boys pulled off an historic 2-1 win against Manchester United.

Haller became only the second player in Champions League history to score four goals on his debut in the competition, after the great Marco van Basten for Milan in 1992.

He is also the first African to score four times in a Champions League match and now has a remarkable eight goals across five appearances for Ajax in 2021-22.