In Focus: Barca are Auba the moon with red-hot Pierre-Emerick

Pierre-Emerick Aubameyang continues to bang in the goals for Barcelona, where he is reviving his career after his sour Arsenal exit.

The Gabon forward has been in fearsome form for Xavi’s side since joining as a free agent in February.

And he enjoyed arguably his best Barca moment yet as he bagged a brace in Sunday's 4-0 thrashing of Real Madrid at the Bernabeu.

With Aubameyang on the verge of double figures for the Blaugrana, who will return to action against Sevilla on April 3 following the international break, we turn the spotlight on the former Arsenal skipper's remarkable resurgence.

He may have officially left by mutual consent but Aubameyang’s four-year stay with the Gunners ended in acrimonious circumstances.

Stripped of the captaincy in December following one disciplinary breach too many, he never played for the club again.

The 32-year-old striker needed a change of scenery — and it seems to have worked wonders for him.

A sensational start to life in Spain has seen him score nine times in 11 appearances, with his goals helping Barca climb to third in LaLiga and reach the Europa League quarter-finals.

Doing what he does best

Aubameyang scored 92 goals for Arsenal at a rate of better than one every other game, while he earned his move to the Premier League having notched 141 strikes in 213 appearances for Borussia Dortmund.

Finding the net is what he is all about.

So far, Barca fans have witnessed the Aubameyang of old — the one who finished as Bundesliga top scorer in the 2016-17 season and shared the Premier League Golden Boot with Sadio Mane and Mohamed Salah in 2019.

Currently averaging a goal every 79 minutes, there is an inevitability about Aubameyang every time he steps on to the pitch.

Xavi promised width and attacking football when he succeeded Ronald Koeman last November — and he has delivered.

Since November 6, no team in LaLiga has completed more through balls per 90 than Barcelona (1.29) and only Real Madrid have completed more final-third passes (127.71) than the Blaugrana.

Xavi’s Camp Nou revolution is going to plan — but this is still a young Barca squad.

It is the third-youngest in LaLiga this season with an average age of 25.4.

A few experienced heads can make all the difference to a team’s development and Aubameyang became the most senior member of the Blaugrana’s attacking department upon signing.

He might not be wearing the captain’s armband but Aubameyang could prove to be an invaluable leader at Barca in other ways.

Having now scored in the North London derby, Der Klassiker and El Clasico, there are few better players for the big occasion.

Read more: The race for the Premier League Golden Boot

A gift from heaven

When Barcelona beat Osasuna 4-0 earlier this month, Aubameyang scored the first of four goals in three appearances before the international break.

Speaking after that match, Xavi was effusive in his praise of the club's most recent recruit.

He said: "Auba has been a gift from heaven.

"He is a positive player, he has come into the dressing room very well, he adapts well to the team, he creates scoring chances, he scores, he presses, he is a privilege to train."

Of course, it is still early days. But on the evidence to date, Arsenal’s loss has been Barca’s gain and then some.

Despite their memorable triumph over Real, Barca need a miracle to catch their great rivals and win LaLiga this term — but they are on course to challenge for the title in the near future.

And that is bound to excite Aubameyang, who has won domestic cups in France, Germany and England but never a league championship.

He is moving towards the twilight of his career. But with his Barca contract running to 2025, there is time for this chapter to potentially be the most glittering of all. 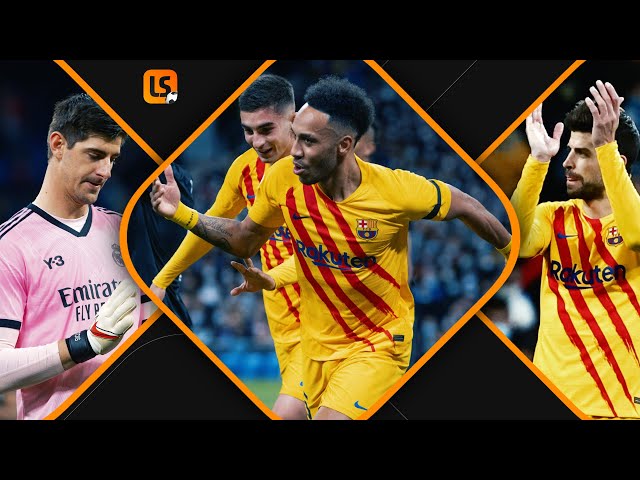