In Focus: Evergreen Dzeko has Inter Edin in the right direction

At 35, Edin Dzeko shows no signs of slowing down.

Serie A champions Inter Milan were dealt a blow when star man Romelu Lukaku left for Chelsea during the summer but Dzeko’s arrival from Roma has gone some way to softening that.

The former Manchester City man has already bagged six Serie A goals during Inter's unbeaten start to their title defence.

With Dzeko sitting level alongside Ciro Immobile at the top of the Italian top flight's scoring charts, we look at the Bosnian's form as he emerges as a shock European Golden Shoe contender.

Dzeko’s record at Roma was impressive but he looks a different beast altogether following his move to the San Siro.

A goal and assist on his debut against Genoa proved to be a sign of things to come with Dzeko on target in five of Inter's seven league games.

His last appearances for Inter before the international break saw him inspire a 2-1 comeback win over Sassuolo after coming off the bench as a second-half sub.

His goal cancelled out Sassuolo's lead and laid the foundations for Lautaro Martinez to wrap up maximum points from the penalty spot to keep Simone Inzaghi’s side in touch with city rivals AC Milan and table-toppers Napoli.

And the veteran hitman will be gunning to add to his tally on Saturday night when the title-holders head to Lazio.

His goalscoring exploits place him joint fourth in the scoring charts across Europe’s top five leagues, where he is in esteemed company behind Karim Benzema, Erling Haaland, Mohamed Salah and Robert Lewandowski.

Whether he can keep the pace with them remains to be seen — but right now he is looking as lethal as any striker in Europe.

It was labelled a disastrous summer for the Nerazzurri after losing manager Antonio Conte just a week after winning the Scudetto — and Lukaku wasted little time in following him out the door when Chelsea came calling.

In their title-winning season, Inter’s counter-attacking style perfectly suited the Belgian's pace and power as he ended the season on top of the combined goals and assists chart in Serie A.

Under Inzaghi’s stewardship, it is a little different — but Dzeko is arguably proving just as important as his predecessor up front.

Despite losing an in-form striker Chelsea paid £97.5million for, Dzeko has helped Inter become the most effective attacking side in Serie A with a league-high 22 goals so far this term.

While Dzeko lacks the dynamism of Lukaku, he makes up for it with his impressive ability to link play and provides the focal point for Inter’s attacks.

Inter legend Walter Zenga has been impressed by the different but equally effective change in style the forward's arrival has delivered.

The former goalkeeper said: "With Lukaku the space in behind was more attacked, now there is Dzeko who comes deep to get on the ball. And when Inter do this it creates extraordinary combinations.

"As a substitute he immediately made a difference, what he has done since moving is unparalleled. He is finding goals at a pace that was not imaginable."

Dzeko has never been considered one of football’s best marksmen, though his numbers suggest he certainly should be.

His 6ft 3in frame means he is not always the most fashionable option.

Yet across spells at Wolfsburg, Manchester City, Roma and Inter, Dzeko has scored an incredible 298 goals — averaging just over a goal every two games.

Throw in a further 134 assists, as well as helping Wolfsburg and City win league titles and Roma reach a Champions League semi-final, and it might be time to be time to give Dzeko the credit he deserves.

He had such an impact at City that Trevor Sinclair recently claimed the club have been lacking in the striking department since his departure in 2015.

The former City man told talkSPORT: "I've said it many times, I think we've struggled since we let Dzeko go.

"Dzeko was a great player for the club and as we've seen he's gone on and scored a ridiculous amount of goals for different clubs.

"He should have stayed, because he was so useful. He was a plan B, he had height, he was a great link-up player and we have struggled with that since he left."

After losing one the world’s most feared No9s, some were not convinced replacing him with an ageing striker would suffice.

But proving doubters wrong is something he is well versed in and Dzeko has shown he is more than capable of leading the Nerazzurri line.

What is more, his impact has been no surprise to the man himself.

He told Sky Italia: "I expected to start strong because I know my qualities and that is why Inter signed me. I always give my maximum, whether I start or come off the bench."

Dzeko’s critics may not go away but that unwavering belief in his ability seems to be all that matters as he continues to prove the doubters wrong. 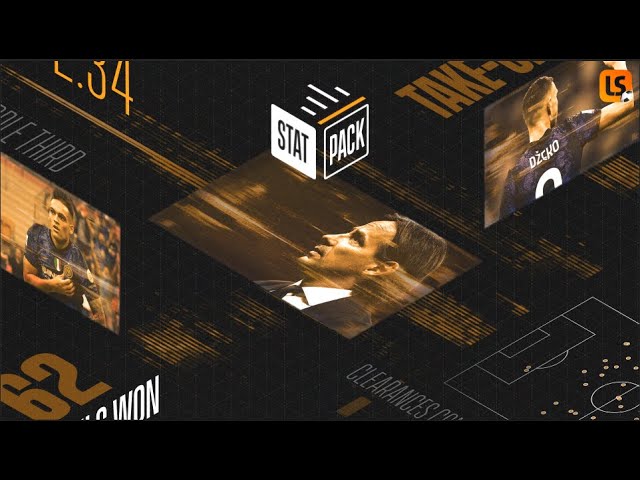