Another international break has come and gone — which means the Premier League is back in full flow this weekend.

Check out our in-depth game-by-game preview of Matchday 8 in the English top flight, packed with all the key facts and statistics you need to know ahead of the action.

Liverpool will look to steal an early march on their title rivals when they take on Watford and their new boss Claudio Ranieri in the early kick-off.

The 69-year-old Italian is back in the Premier League and will hope to maintain his fine personal record against the Reds, having won four out of five previous home league meetings with the Merseysiders.

Watford were the side to end Liverpool’s club-record 44-game unbeaten run in the top tier when these sides last met in February 2020 — a shock 3-0 win snapped a run of eight meetings without a victory.

But Jurgen Klopp’s visitors are the only unbeaten team remaining in the division, though draws in their last two outings see them enter this clash a point behind Chelsea at the top of the league.

Mohamed Salah is looking to score in eight straight league games for the first time in his career and has netted an impressive eight in six clashes with Watford.

Both Trent Alexander-Arnold and Diogo Jota are expected to shake off knocks to feature, as is Hornets forward Josh King.

Two West Midlands rivals lock horns as Aston Villa host a Wolves outfit who have caused them plenty of problems in recent times.

Villa have only won one of their last seven home clashes with the men from Molineux and have suffered defeats in four of the last seven meetings.

However, Dean Smith’s hosts are unbeaten in their last five Premier League games and can take heart from Emiliano Martinez’s excellent record against Wolves — the Villa stopper has kept clean sheets in all three of his career meetings with them.

Bruno Lage's troops have won three of their last four outings after a slow start and the stats suggest things could still improve further, given their expected goals total of 11 is a full six strikes better than their actual tally (five).

Visiting winger Francisco Trincao will feel his moment is just around the corner as he waits for his first goal, despite boasting an xG of 2.4 — the highest total of any Premier League player yet to hit the back of the net.

The contest will come too soon for Villa’s Leon Bailey (thigh) while Trincao (coronavirus) should return for Wolves.

Leicester welcome Manchester United to the King Power Stadium with the Foxes in desperate need of a big result to help kickstart their campaign.

The home side are four matches without a win, which is their longest such streak since a six-game run under former boss Claude Puel in February 2019.

Brendan Rodgers has seen his side struggle defensively in particular with only one clean sheet in their last 13 Premier League outings — and their latest test will pit them against the division’s away-day specialists.

The Red Devils are looking to extend their unbeaten streak on the road to 30 games and have only lost one of their 15 top-tier trips to Leicester, though they did exit the FA Cup here last term.

Cristiano Ronaldo has only faced the Foxes once in his career and will hope to make them the 120th side he has scored against in club football, while Jesse Lingard has three goals and three assists in his last six meetings with Leicester.

Former United defender Jonny Evans (foot) is hopeful of featuring for the hosts but Wilfred Ndidi (hamstring) is unavailable, while United are without first-choice centre backs Harry Maguire (calf) and Raphael Varane (thigh).

Struggling Burnley head to Manchester City hoping to snap one of the Premier League’s most depressing streaks.

Remarkably, City have won the last four meetings between the two sides in all competitions by the same 5-0 scoreline, with the last eight meetings totaling an aggregate score of 30-1 to Pep Guardiola’s men.

The stats point towards a similar outcome on this occasion, with City having kept a clean sheet in their last four home league games and three of those ending in 5-0 victories.

Despite finally signing his new contract last month, Sean Dyche is still searching for his side’s first win of the campaign and their 10 league games without a victory is the longest such run in England’s top four divisions.

Dyche will be hoping that experience and know-how comes to the fore sooner rather than later — the average age of his starting XI (29 years, 39 days) is the Premier League’s highest while their 18 players used this term is the division’s lowest total.

City could be without Ilkay Gundogan (knock) while Ferran Torres fractured his foot on international duty.

Burnley will make late decisions on Charlie Taylor and Matej Vydra (both knocks).

Norwich’s search for a first win of their Premier League campaign continues against in-form Brighton at Carrow Road.

Though the Canaries lost both of their top-flight clashes with the Seagulls in 2019-20, they had won nine of the previous 11 meetings and will take heart from getting a first point on the board against Burnley last time out.

That result ended a 16-game losing streak in the top tier and another clean sheet here would mark back-to-back shutouts in the Premier League for the first time since March 2016.

Graham Potter’s visitors have enjoyed a fine start with four wins and only one defeat from their first seven outings and only Chelsea (21) and Manchester City (23) conceding less than their 26 goals in 2021 to date.

Leandro Trossard will be eyeing more success against Norwich having played a direct role in all three of Brighton’s goals against them in 2019-20 — scoring twice and setting up the other.

Mathias Normann (abdominal strain) should return for the hosts while Yves Bissouma is expected to feature for the visitors.

After making slow starts to their respective campaigns, Southampton and Leeds will both be targeting three points at St Mary’s.

Ralph Hasenhuttl’s men are still searching for a first win despite some encouraging performances and will be without their suspended skipper James Ward-Prowse for the first time in 102 league outings.

What is more, they face a Leeds side who have beaten them more than any other Premier League side, including victories both home and away in 2020-21.

The Whites have not been their usual free-flowing selves in front of goal so far this campaign, averaging exactly one goal per game as opposed to their impressive 1.6 per match last term.

Marcelo Bielsa’s troops have also given up a league-high 117 shots so far, though their tally of 105 attempts on goal is also the fifth highest in the top flight.

As well as Ward-Prowse’s absence, the hosts are without Jack Stephens (knee) and Che Adams (muscle) while Leeds will be without Patrick Bamford (ankle) — though Raphinha and Kalvin Phillips could feature.

Brentford host Chelsea in an all-London affair with the in-form hosts daring to dream of an almighty upset.

Prior to the international break, Thomas Frank’s Bees backed up their pulsating 3-3 draw with Liverpool with an excellent away win at West Ham, continuing their seamless transition into Premier League life.

Now, they will target a first victory over Chelsea since February 1939 having avoided defeat in their first three London derbies back in the top tier, drawing with Crystal Palace and beating both Arsenal and the Hammers.

The visiting Blues have an even more imperious record of their own however, having won their last six straight away games in the capital — a seventh such victory here would make it a league-record streak.

Thomas Tuchel’s troops are flying high once again and are outperforming their metrics in both defence and attack, with only three goals conceded despite an xG against of 8.6 and a league-high shot conversion rate of 15.3%.

Kristoffer Ajer (hamstring) should be back in contention for the home side while the visitors are without Antonio Rudiger (back) and Hakim Ziyech (illness).

Rafael Benitez’s hosts have enjoyed an excellent start to the season and have won each of their opening three home contests — not since the 1978-79 campaign have they tasted victory in their first four.

History bodes well for them to do so here though, with the Toffees enjoying more wins (27) and having scored more goals (87) against the Hammers than any other top-level side.

The clash sees David Moyes return to the club where he enjoyed 11 successful years as boss and he will be targeting a repeat of last season’s 1-0 away triumph, which would make it back-to-back away wins in the fixture for the first time since 1930.

Said Benrahma and Michail Antonio have struck up a deadly partnership for the visitors this season, setting up 14 chances for each other which is the most of any duo in the division.

There is sure to be a carnival atmosphere in St James’ Park as Newcastle begin their new era of ownership by welcoming Tottenham to Tyneside.

The Magpies will have to reverse the recent formbook if they are to keep spirits high though, having failed to win any of their last four home clashes against the North Londoners.

Still hunting a first league win, hopes are once again set to be pinned on the mercurial Allan Saint-Maximin, who has carried the ball further (1950 metres) than any other player in the Premier League.

For Spurs, recent away performances have left a lot to be desired having gone down 3-0 at Crystal Palace and 3-1 at bitter rivals Arsenal — they have not conceded three or more goals on consecutive road trips since 2014.

Harry Kane will hope to open his Premier League account for the season at a ground that has been good to him in the past, with five of his six career goals against the Magpies coming on their own patch.

Callum Wilson (thigh) is set to miss out for the hosts but Jonjo Shelvey is close to returning, while Tottenham will hope to have some of their South American contingent available following international trips.

Monday night football will mark an emotional return to Arsenal for Patrick Vieira as the former Gunners skipper takes his Crystal Palace side to the Emirates.

Playing on the first day of the week has proved extremely favourable for the North Londoners in recent times, with victories in their last seven Monday outings seeing 15 goals scored and only two conceded.

Though things have improved for the Gunners in recent weeks, their six first-half goals conceded is the highest such tally in the league — but Palace have only netted once in the opening period this term.

The Eagles will travel with confidence having not lost any of their last three trips to the Emirates, while they ended a run of 11 London derbies without a victory when beating Tottenham 3-0 last month.

Wilfried Zaha opened the scoring against Spurs and will no doubt lead the charge again for the visitors here — no player has been fouled more than him (24 times) so far this season.

Granit Xhaka (knee) is sidelined with a knee injury for the hosts but Palace have no fresh injury concerns. 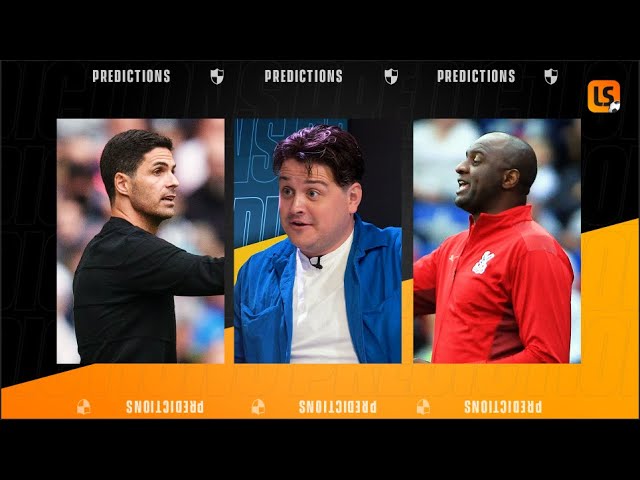 World Cup 2022 predictions: The favourites to lift the trophy in Qatar

Champions League final predictions: Goals on the cards in Paris

World Cup 2022 predictions: The favourites to lift the trophy in Qatar

Champions League final predictions: Goals on the cards in Paris