Erling Haaland continues to defy belief and I’m sure Aston Villa fans are fearing the worst ahead of the big Norwegian rolling into town this weekend.

At the start of the season, I said that rotation would be the only thing that could stop him winning the Golden Boot and it’s starting to look like even that won’t be a factor.

After all, who needs to play 90 minutes when you’ve bagged a hat-trick before half-time?!

His finishes may look simple, but it’s all about his intelligence and natural instinct. The positions he constantly takes up are so clever. He’s like a magnet to the ball in and around the six-yard box.

For any youngsters watching him, that anticipation is the single-most important trait for any goalscorer.

Realistically, he’s not going to be hitting nine goals a month all season — but if anyone is going to go and break the 40-goal mark, it’s him.

The Champions League returns next week but I’m still expecting him to start against Tottenham the following Saturday. He’s fit and firing, so why not?

Looking even further ahead, when most of the top-flight stars come back knackered from an intense World Cup in December, he’s going to have had his feet up resting for a month.

Everton host Liverpool in the Merseyside derby this weekend and it’s a fixture I have fond memories of playing in.

Though the Toffees don’t often come out on the winning side, they're very effective at grinding out draws at home against their rivals — with eight of the last 11 Premier League derbies there ending level.

When there’s a gulf between two teams, a derby atmosphere is a great leveller. At Goodison in particular, it can be very intimidating for opposition teams.

When I played, even us non-Scouse lads were so aware of what the game meant to everyone. All the staff at Everton support the club, so you’re left in no doubt!

Jurgen Klopp is also an emotional guy. He wants to deliver for his own fans and that’s why, generally speaking, it’s a fixture that always delivers entertainment.

On Sunday afternoon, the weekend is rounded off by Manchester United hosting early leaders Arsenal.

For the hosts, beating United would be a statement victory, though I don’t think they have to win at Old Trafford to prove themselves.

Regardless of how they get on, it’s been a fantastic start. The five wins have been impressive, but it’s more the various ways in which they’ve had to earn them.

Other sides will be taking more and more notice of the Gunners with each passing week and momentum can be so powerful — those players will be feeling like the sky is the limit at the moment.

Personally, I can’t wait to see how Gabriel Jesus gets on against United’s backline.

The Brazilian is playing at the top of his game right now and his impressive strength — which often gets overlooked — could cause some serious problems for the home side.

Anyway, time for my weekend predictions.

Of course, I have loyalties in this one from years gone by — and I’m going to lean on that loyalty by going for a draw.

Everton aren’t creating many chances so are having to be very efficient in the final third, though Anthony Gordon is giving everyone problems.

Up against Liverpool’s high line, I think he can have some joy and the atmosphere will be electric.

Leeds have had a good start, particularly at home where they are looking tough opponents for anyone in the division.

However, I’ve seen quite a bit of Brentford recently and have been really impressed — and they are also unbeaten on their own patch.

Thomas Frank’s side could quite easily have a few more points on the board and I reckon they edge this.

Chelsea have moments where they look like their old selves but when the momentum changes in a game they’re really struggling to regain control.

West Ham were brilliant against Tottenham in midweek and can consider themselves unlucky to have picked up just a point.

If they can replicate that performance, they can get something at Stamford Bridge.

Two teams with a similar calibre of player, as well as a similar style in terms of liking to play on the break.

This could actually suit Palace more because Newcastle will be expected to take control of the game in front of a pumped-up home crowd.

The Magpies have been brilliant this season but I’m not quite sure if they're comfortable dominating matches just yet.

Bournemouth bounced back from their 9-0 Liverpool hammering with a clean sheet and Forest could do the same here.

When you’re on the end of a heavy defeat, the first thing you look to do is tighten things up at the back and take pride in your defending.

It’s a big match for both — even this early in the campaign — and could end up being a cagey affair.

It was a tough trip to West Ham for Spurs but they remain unbeaten, which will please Antonio Conte hugely.

Fulham deserve respect for the way they’ve gone about things so far because there’s been nothing lucky about their results.

That said, the home side’s extra firepower should prove crucial in this one.

My heart keeps leading me to back Wolves to turn things around, though they are really struggling for goals.

Being honest, nobody in their squad looks likely to score 10 this season and that has to be a concern — especially against a lively Southampton side.

That was a great result against Chelsea for the Saints in midweek and they can follow up here.

It’s a tough task for any side trying to stop City at the moment, never mind a struggling Aston Villa.

They're conceding silly goals and if they do so early here, the atmosphere inside Villa Park could turn really hostile as City crank the pressure up.

I think the hosts may score but can’t see them troubling the champions.

Leicester would’ve fancied themselves to beat Brighton home and away 12 or 18 months ago, but things have changed significantly since then.

It’s a difficult trip for the Foxes given the start Graham Potter’s side have made and home advantage will also give them a boost.

With the disruption the visitors suffered late in the transfer window, they may need more time to click into gear.

United will want to show everyone what they can do against a top side, though you have to say Arsenal are playing the better football.

I have a feeling the Red Devils may fancy themselves to go toe-to-toe with the Gunners in terms of attacking football and that could be their downfall.

Arsenal are in such a good rhythm — they’ll fancy it at Old Trafford. 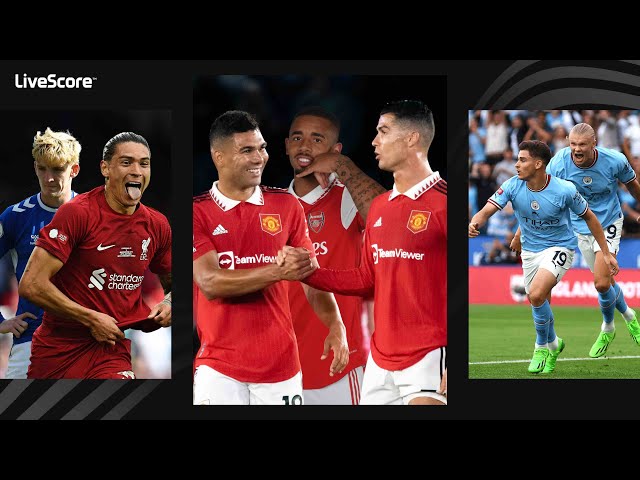