Harry Kane says England are raring to bounce back from a difficult summer when they take on Italy at the San Siro tonight.

The Three Lions face Nations League relegation if they fall to defeat after two disastrous losses to Hungary back in June — the second by a 4-0 scoreline on home soil.

"There is definitely a determination among myself, the players, the manager and the staff to bounce back," Kane told reporters at the pre-match press conference.

"We’ve had a really successful four or five years and there’s going to be times when you come up against a bad spell.

"We know we didn’t perform well enough in the summer but there’s always another opportunity, starting with this game against a very good side.

"I think we’ve had a great week of preparation and the boys look very hungry in training."

Reports this morning have suggested that out-of-favour Manchester United defender Harry Maguire is in line to start, with new call-up Ivan Toney set to miss out on a Three Lions debut. 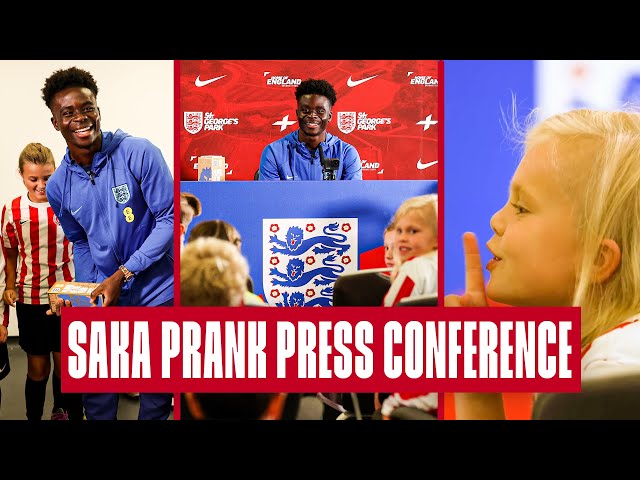 Bukayo Saka has been crowned England Men's Player of the Year in a poll of Three Lions fans.

The Arsenal star beat Declan Rice and Harry Kane to the prize after scoring three times in nine games for his country.

Arsenal ace Saka, 21, was handed his award at St George's Park by a group of grassroots footballers.

The youngsters were given the chance to quiz the forward, who beamed: "I’m so happy, I can’t put it into words how happy I am.

"To play for England is special. To get picked to play for your country is another level of honour and proudness in yourself.

"You’re just happy every time you get to come here and put on the shirt and play at Wembley in front of all the fans, it’s a beautiful feeling."

Brennan Johnson believes Wales’ second-half showing against Belgium was evidence they are capable of mixing it with the world’s elite.

Rob Page’s men lost 2-1 in Brussels and must now beat Poland on Sunday if they are to avoid relegation from the Nations League’s top tier.

Goals from Kevin De Bruyne and Michy Batshuayi had Wales 2-0 down at half-time before an improved showing after the break — something which gave Nottingham Forest youngster Johnson encouragement.

The winger, 21, said: "It was a game of two halves. In the first, we lacked a lot of belief. We didn’t know how good we could be on this night, and especially what we could bring going forward.

"We didn’t show any of that. In the second half we came out with a different mentality and did ourselves proud.

"Poland is now a massive game to stay in this league. It’ll be a really big game and we’ll all be ready for it."

Over 30,000 home fans are expected in Cardiff for the crunch clash — the Dragons’ final game before the World Cup in Qatar.

England’s clash with USA on October 7 will be used to celebrate the 50th anniversary of the senior women’s team, the FA have confirmed.

The Lionesses’ first full international saw them face Scotland in November 1972, with players from that original side set to line up alongside Sarina Wiegman’s Euro 2022 winners before kick-off next month.

Over 100 former England internationals will also be in attendance to receive acclaim for their role in progressing the women’s game in front of a sold-out Wembley.

Wiegman said: "We are all grateful to the former generation of players who have paved the way for today’s growth and success.

"All of them represented their country with so much talent but also fought so hard on and off the pitch to break barriers and make the women’s game what it now is.

"The players today also know the challenges they faced and appreciate everything that has been done to give them the opportunities they now have.

"It is great we can say thank you to the Lionesses legends."

Mansfield have brought one of their upcoming League Two games forward by two hours in a bid to tackle rising energy costs.

The concept of games starting earlier throughout winter has been floated publicly in recent weeks, with the idea being that smaller sides can save on floodlight bills.

Now, the Stags are set to put the idea to the test when they welcome Walsall to Field Mill on October 15 at 1pm, rather than the usual 3pm slot.

A statement read: "The club is endeavouring to mitigate the forthcoming, considerable increase in energy bills.

"As part of these efforts, the earlier kick-off time will enable the club to discern whether significant savings can be made on floodlight usage and other energy costs."

Arnold to coach Australia through to 2026 World Cup

Robertson admits Liverpool have been 'nowhere near good enough'